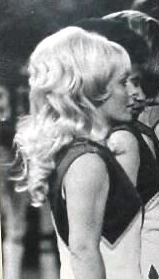 Born in Northampton, Pa, she was the daughter of the late Robert Peter and Sylvia (Hayden) Bell. A 1962 graduate of Exeter High School, Sylvia was the Salutatorian of her class and Head Majorette, best remembered for her fire baton routines during football games. After graduation, she went directly to Washington, D.C. and worked in the Pentagon. While in Washington, she was a Washington Redskins cheerleader on their first squad in 1962. She earned her Bachelor’s degree in Accounting from Wilkes University going to night school while working full-time. Staying with the Federal Government in various positions, she eventually retired from the Tobyhanna Army Depot. She was a member of the Juanita Lodge 8 and Harmony Chapter 58, Orders of the Eastern Star, and served as Worthy Matron several times.

In addition to her parents, she was preceeded in death by her brother, Richard Bell.

Many thanks to the Memory Unit Staff at Timber Ridge for their patience and kindness to my mother and all of their patients.

Funeral services will be held at the convenience of the family. Interment will be in the Mt. Zion Cemetery, Harding. Due to the current health crisis, there will be no calling hours.

For more information or to send condolences, please visit us at www.metcalfeshaver.com