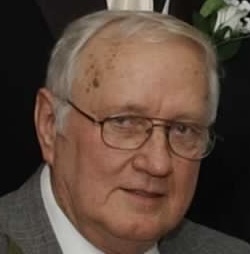 Frederick C. Hanadel, 84, of Monroe Township passed away Wednesday, December 29 with family at his side.

He was born in Swoyersville, son of the late Andrew and Leona (Wyonowski) Hanadel. Frederick served our country in the United States Army and was a machine mechanic before retiring in 1999. He was an avid sportsman who enjoyed hunting and fishing with his sons. He was often found “tinkering” in his shop building and repairing things.

Surviving are his children, Fred Hanadel, Jr and his wife Cindy of Monroe Township, George Hanadel and wife Sandi of Dallas, and Jackie Geary and husband Rick of Falls. He will be missed by his 3 grandchildren and 4 great-grandchildren.

The memorial service will be at the convenience of the family from Nulton-Kopcza Funeral Home, 5749 SR 309, Monroe Twp.
Interment will be in Memorial Shrine Park, Carverton.

In lieu of flowers the family would like donations to a charity of your choice.