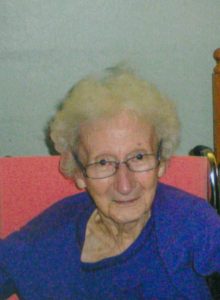 BETTY A. IDE, 88, formerly of Harding passed away Wednesday in the Meadows Nursing and Rehabilitation Center, Dallas.

Born in Harding she was the daughter of the late Ralph and Blanche Sickler Dymond. She was a graduate of West Pittston High School. Prior to her retirement she was employed at Wesley Village of Jenkins Twp., for 20 years. She was a member of the F.O.E. of Wyoming.

Funeral services will be held Monday at 11am in the Metcalfe Shaver Kopcza Funeral Home Inc. 504 Wyoming Avenue Wyoming with her son Ralph Ide officiating.

Interment will be in the Fitch Cemetery, North Moreland.

Friends may call Monday 10am-11am in the funeral home.

Cancel reply
Next BEVERLY A. HANDLEY