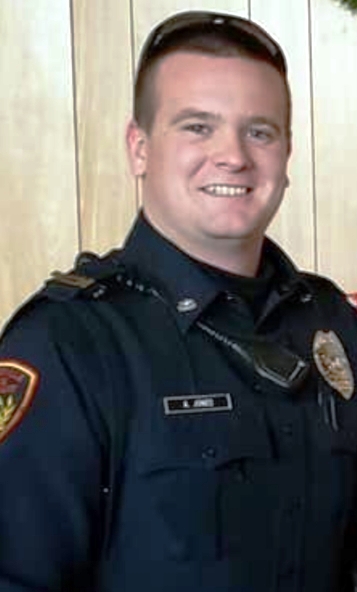 Andrew J. Jones, “AJ”, 25, of Wyoming PA, passed away as of a result of injuries sustained in a motor vehicle accident. The beloved son of Tammie and John Jones was born on August 9, 1994 in Kingston, PA.

He is a graduate of Wyoming Area Class of 2012. Throughout high school he was a player of the Wyoming Area Warriors football team and baseball team. He also was an active member of Wyoming Area student council and the spirit tribe.

AJ enjoyed hunting, fishing, trips to the cabin with his friends that turned into family. He enjoyed going on adventures with his fiancé, Erin. AJ also enjoyed spending time with his 17 month old nephew, “Little Joe”. He will be missed by his buddy “Riley”. AJ will be terribly missed by a boatload of friends.

AJ was currently employed as a full time officer for the Swoyersville Police Department. He had also worked for Summit Hill Police Dept. along with Exeter Police Dept. and the Wyoming Police Dept.

AJ also loved lending a helping hand with his extended family at the Wyoming Valley Airport. Anything that involved adventures and helping out he was right there.

Preceding him in death was his maternal grandparents Spencer and Maxine Masters.

Funeral services will be held Saturday at 11am in the Wyoming Avenue Christian Church 881 Wyoming Avenue Kingston, Pa 18704 with the Pastor Dennis Gray officiating.

All relatives and friends are asked to go directly to the church the morning of services.

Interment will be in the Wyoming Cemetery.

In lieu of flowers memorial contributions may be made to the Scholarship Fund in Memory of Andrew J. Jones to the Lackawanna College Police Academy 501 Vine Street Scranton, Pa 18510.

For more information or to send condolences please visit www.metcalfeshaver.com.